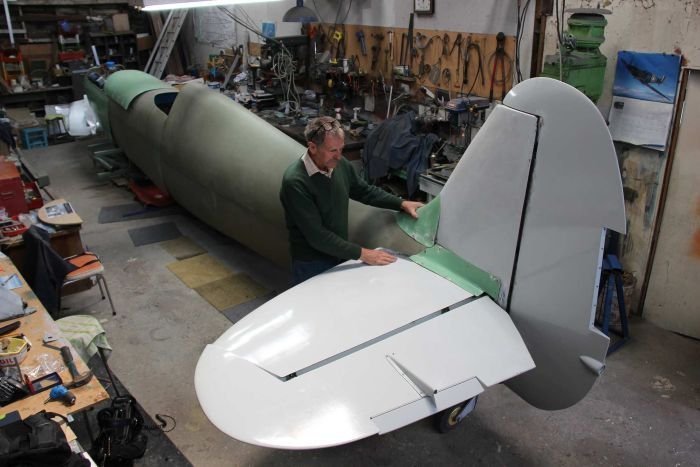 A former Vietnam Vet has spent the last 8 years buulding his own full size working replica of a Spitfire MK1 from scratch in a boat shed. He still has about 2 years of building left.

69 year old Rod McNeill is a retired farmer from the Australian state of Tasmania. His love affair with Spitfires began when he started putting together model planes when he was a teenager. After finding out scale kit versions of Spitfires were about $A250,000 he worked out it would be cheaper to build a full size replica himself.

While the replica is based on original plans with the same shape and dimensions, there are some modern modifications. The engine in the original Spitfire was a V12 aluminium (aluminum) engine, while this replica has a carbon fibre V8 engine. However, this Spitfire will still be able to fly at more than 560 km/h (348 mph).

Mr McNeill has put a lot of research into the build of the Spitfire while meticulously building parts. He also had to teach himself how to TIG weld, work with carbon fibre, and use computer-aided design. He didnt do very well in mathematics and geometery at school, so had to brush up on some of those skills during the building process.

The replica has been made so precisely it even has gun buttons, but it won’t have any guns, maybe just gun ports.

In a boat shed on the edge of the Hobart’s River Derwent, a new version of an old warrior is being brought to life, as Vietnam veteran Rod McNeill builds a fully-operational, full-sized, Spitfire Mark One from scratch.https://t.co/Z0qlAYvktk pic.twitter.com/Yo6Xf71s9a

Even though most of the aircraft is being hand built through a process of trial and error, Mr McNeill needed to source some parts externally. A replica plane manufacturer in the US built the almost 3 metre (9.8ft) long propeller. It also took 5 years to find a craftsman, located in South Australia, to make the replica canopy. Some original Spitfire parts, such as the cockpit instruments were sourced from a museum in the UK.

By keeping his hands and mind busy, the building process has had the unexpected benefit of keeping Mr McNeill’s PTSD at bay.

Mr McNeill told the Australian Broadcasting Corporation (ABC), “They’re probably one of the most beautiful planes to fly and they [are] … one of the best looking planes that are around. I think that’s what the attraction to them is, and also there’s not a lot of them are available — very few are flying so it was a combination of all those things put together. And also the opportunity came up to do this when I found out it was such a high price for the kit-scale version, it was good to work out that I can build one for less than I can buy a scale version.”

Geoff Zuber, President of the Spitfire Association told ABC News, “Every Spitfire looks beautiful from every angle — from the front, from above, from below from the side. It was a machine of war it was designed to be very effective at killing and very effective at defending itself, but it combined that with beauty. It’s an extraordinary undertaking because … it is an extraordinarily difficult aircraft to build. If you compare it to the American Mustang it’s rough equivalent, the Mustang was very American, very industrial; the Russians [aircraft] were agricultural, they were easy to put together, easy to fix; but the Spitfire represented British manufacturing and British aesthetic thinking. So just the thought of putting something like that together as a one off is in itself quite something.”