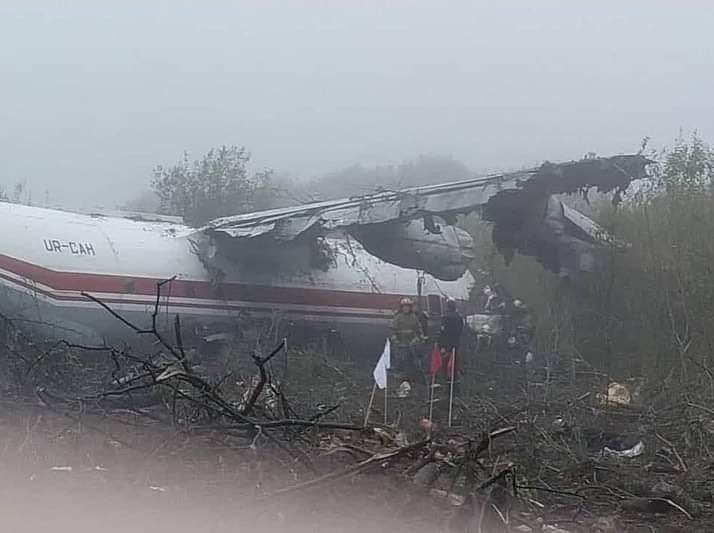 The aircraft, with registration UR-CAH, had first flown in 1968 and had 12,922 total airframe hours under its wings, completing 6616 cycles. The cargo plane with 4 Ivchenko AI-20M engines was on a cargo mission with five crew members and three other occupants.

Sadly, five crew members died, and three other people on the aircraft were rescued. The plane had taken off from Vigo Airport, Spain and was bound to Lviv-Danylo Halytskyi International Airport. The plane took substantial damage beyond repair.

The flight from Vigo, Spain, to Lviv, Ukraine, carried 13 tons of car parts. Around 7.4 nautical miles from the airport, the aircraft disappeared from radar. The plane was found around a nautical mile ahead of runway 31 near a stadium and cemetery. The crew attempted an emergency landing. The aircraft ran out of fuel, killing five onboard. Three people were taken to the hospital with injuries.

What did the Mayor say?

The Mayor of Lviv commented on this incident, saying, “The crew had declared an emergency due to being low on fuel but didn’t reach the runway anymore. The aircraft was found with the cockpit cut off, the cargo shifted and crushed the occupants.”

The aircraft’s final destination was Bursa, Turkey and was scheduled to land in Lviv for refuelling. Following the incident, EASA seized the status of the airline. The airline, no longer an authorized third-country operator, wasn’t allowed to fly in the European Airspace.”

On October 9 2019, the National Bureau of Air Accidents Investigation of Ukraine (NBAAI) announced a special investigation to determine the causes of the accident. With the black boxes recovered in good condition, the investigators could access information like radar data, air traffic communication, emergency service response and more.

According to a meteorological report, there was no wind at the airport. Visibility was 250 meters. The FDR and CVR were also found in good conditions. It’s found that they didn’t provide any critical remarks.

According to flight recorders, the aircraft was significantly below the glide path. An alarm sounded that decision height had been reached, at an altitude of 60m. However, no crew member responded. The aircraft soon collided with trees. The NBAAI reported that airport systems generally operated with all the requirements.

On October 8, 2021, the NBAAI released their final report. The report highlighted some probable causes of the accident. The report points out the crew’s failure to perform the flight in instrument conditions, probably due to excessive physical fatigue, which led to an unconscious descent of the aircraft. The crew had to depend on instruments due to dense fog.

The report also added that excessive cargo weight could have burned more fuel than expected. NBAAI also reported that all engines and propellers were in good condition. Furthermore, there weren’t any defects on the aircraft at all.