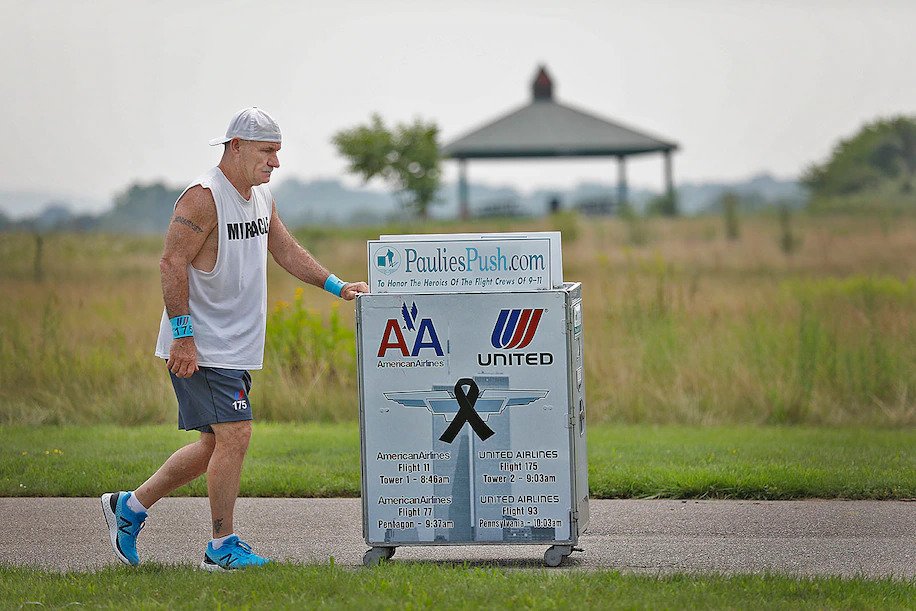 A former flight attendant, Paul Veneto, arrived at Ground Zero in New York City, pushing a beverage cart from Boston to Ground to honour his fellow flight attendants who died on Sept. 11, 2001.

Veneto completed a 220-mile walk from Gate C19 at Boston Logan International Airport to Ground Zero on Saturday to mark the 20th anniversary of the incident. Few days before arriving at Ground Zero, he said:

“I knew it had to get done; this story had to be told. That was the main focus for me; I needed to make sure these guys were recognized. And so I knew what I was doing was important for their families, that it needed national coverage. I had to do something no one’s ever done.”

He faced many obstacles on his way to New York. He said he completed the journey, reminding himself that he had to keep pushing the beverage cart, regardless of what obstacles or weather he faced. Paul Veneto holds a composite of photos in Boston, showing the crew who lost their lives on United Flight 175 on Sept. 11, 2001. Greg Derr/The Patriot Ledger via AP

He used to fly on the same route. Paul had a day off that day, which thankfully saved his life. After the 9/11 incident, his family urged him not to continue as a flight attendant.

However, he continued as a flight attendant going against his family wishes. He worked with United for a full decade after the incident. He brought his suitcase on every flight with a picture of the flight 175 crew on it.