Australia’s most trusted charity, and one of the world’s largest aeromedical organisations, Royal Flying Doctor Service (RFDS) turned 90 last week. The RFDS currently operates from 24 bases with a fleet of 69 aircraft.

The Australian Inland Mission Aeromedical Service (now RFDS) was started by Rev John Flynn, a Prebyterian minister, in May 1928. The first flight occured 17 May 1928 with a de Havilland DH.50 named Victory that was leased from the Queensland and Northern Territory Aerial Service (now Qantas) for 2 shillings per mile flown for the first year.

90 years ago today, our first pilot took off from Cloncurry to Julia Creek, he was flying a single engine, timber and fabric bi-plane named ‘Victory’ leased by @Qantas. He had with him the very first of our flying doctors, Dr Kenyon St Vincent Welch. #RFDS90 pic.twitter.com/xlzVbKhIYc

The fledgling service was based in Cloncurry in the state of Queensland, flying 50 missions to 26 locations in the first year and treating 226 patients. The service expanded with the invention of a pedal-operated generator to power a radio receiver that allowed remote cattle stations to call for help in an emergency.

Want to see a Tiger Moth take flight? 🛫 Check out the amazing aircraft that have joined us to celebrate 90 years of the Flying Doc! #RFDS90 pic.twitter.com/jAmzLG0Z2i

The RFDS base in Port Augusta in the state of South Australia alone covers an area of 840,000sq km (521,951 sq miles) – an area slightly larger than France, Greece and Switzerland combined.

The @RoyalFlyingDoc turns 90 this week! Here’s a look at celebrations and operations in SA. pic.twitter.com/CCXcf7stNX

There are also around 16 sections of highways around Australia that double as emergency airstrips for RFDS evacuations. Generally the police will block off both ends of the strip. RFDS pilots then establish that section of the road is closed before landing. After landing the aircraft will pull off the runway to allow the road to reopen before it is closed again by police for the take off.

The RFDS is so ingrained in Australia’s thinking that Australia’s $20 note is full of references to the organisation. 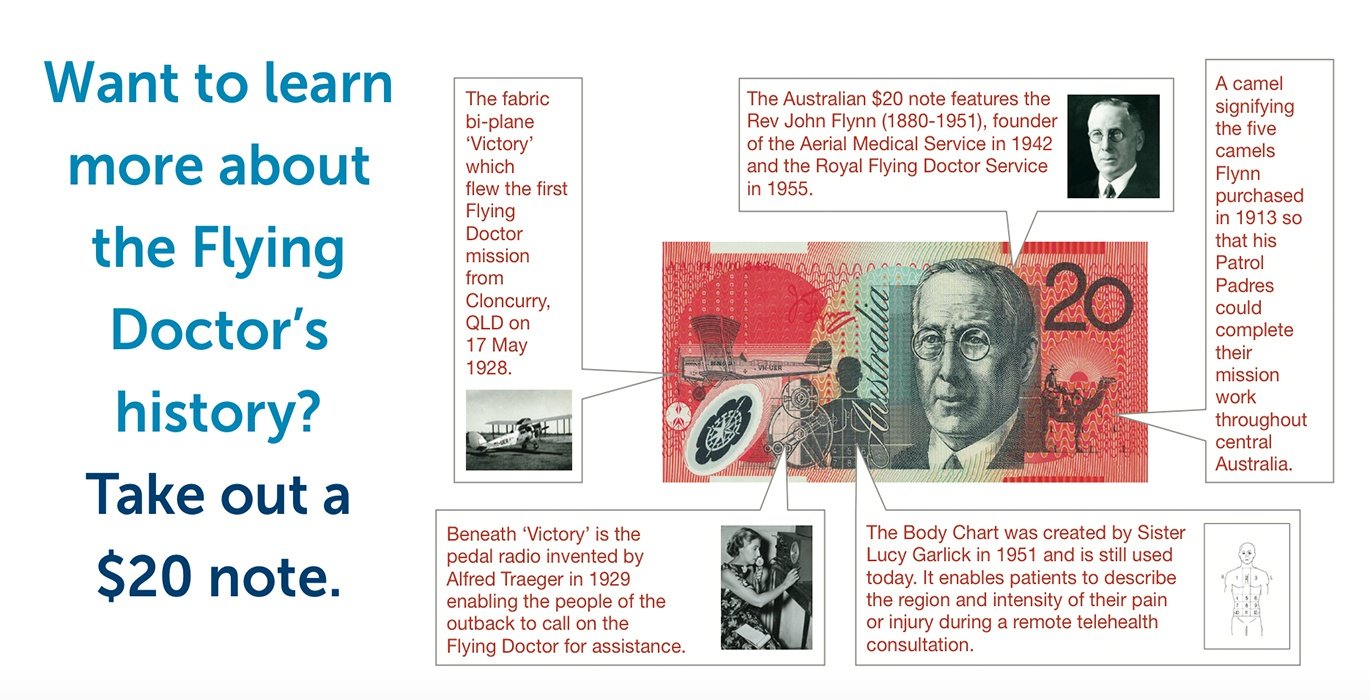 The RFDS is also the first aeromedical service in the world to receive the PC-24 ambulance aircraft. The PC-24 is single pilot certified, has a 3 stretcher configuration, dual gear main landing gear that will allow the aircraft to land on both paved and unpaved services, will have 2 rear mounted Williams FJ44-4A engines with maximum take-off thrust of 3400lbs each, have a ceiling of 45,000 feet and will be capable of sea level pressurisation.

Pilatus and the RFDS has such a strong relationship that Pilatus chose the RFDS to receive it’s 1500th PC-12 in June 2017. 2000 Pilatus employees and guests attended the handover.