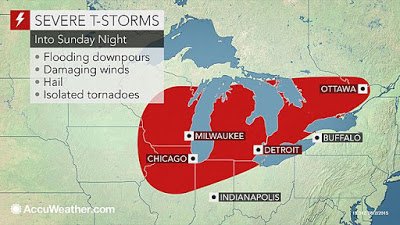 GRAND RAPIDS, MICHIGAN – Severe weather will threaten airports and air traffic in the eastern United States and Ontario beginning Sunday evening that has the possibility of causing ground stops and delays at airports in it’s path.

According to AccuWeather Meteorologist Michael Doll, “Thunderstorms will become severe by late afternoon from southern Ontario to Iowa and move east and southeast into the overnight.”

Another AccuWeather Meteorologist Edward Vallee added that the biggest threat to those in the path of the storm is blinding rain, strong and damaging winds, and even isolated tornadoes.

Along with disrupting the flow of air traffic at multiple airports, meteorologists are warning the public to avoid outdoor activities and take caution driving especially on major interstates in the path of the storm.

Major airports that may be affected include KRFD, KORD, KMDW, KMKE, KGRR, KDTW, CYOW, and CYYZ. Other smaller airports in the storm’s path should also expect long delays and possible airport closures. The storms are expected to weaken as they move towards the southeast overnight and are not expected to cause as much chaos by the time they reach northwestern New York.

Some information in this article is courtesy of AccuWeather. To read more on the expected severe weather click HERE