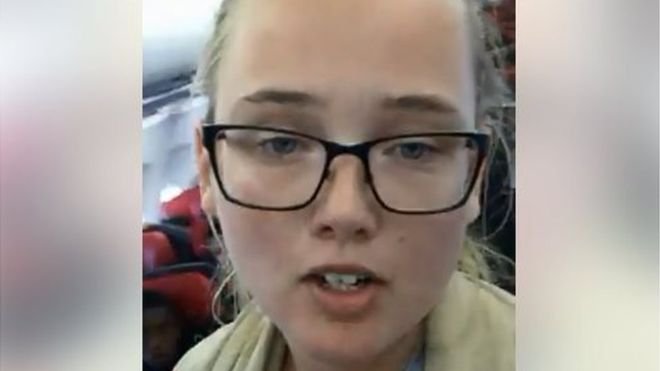 A Swedish student has prevented an Afghani from being deported after she refused to sit down until the 52 year old man was removed from the plane they were on. The Guardian reports that 22 year old Elin Ersson bought a ticket on the Turkish Airlines flight from Gothenburg to Istanbul after she and other asylum activists discovered that an Afghani man was due to be deported on the flight.

Ms Ersson live-streamed the protest in English. During the live-stream some passengers can be heard supporting her while others were hostile. A flight attendant can also be heard in the live-stream repeatedly asking her to turn her phone off.

At one stage a passenger, thought to be English, tells her he doesn’t care what she thinks and she is frightening for the children onboard. Ms Ersson then says in the live-stream the passenger took her phone off of her before a flight attendant got it back for her.

SBS reports that one man also translated what Ms Ersson was saying into Turkish so other passengers could understand, prompting a round of applause. A Turkish passenger also stood in support of Ms Ersson. A football ball team that was onboard also supported her.

Deportation from Gothenburg to Afghanistan

The Guardian reports that Ms Ersson was trying to stop the deportation of a young Afghani man, but he didn’t end up being placed on board. “[H]is family and Ersson had been approaching people at the airport before the flight to inform them what was happening. Among the people they had spoken to was the football team who ‘were supporting the cause, so I knew that I had people supporting the idea of me standing up. I had the mental support that I needed.'” Instead a 52 year old Afghani man being deported was placed onboard.

Ms Ersson got her phone out to start live-streaming after a security guard pushed her away after she started talking to the man being deported. “When she started to touch me and push me I took up my phone and started filming in case something happened to me, and I wanted to make sure that other people knew what was going on,” Ms Ersson told The Guardian. Another reason for live-streaming was so the family of the young Afghani man knew that he wasn’t on board.

Airport authorities refused to use force against Ms Ersson, and eventually the man due to be deported and three security personnel left the plane, shortly followed by Ms Ersson.

It’s believed the young man she originally tried to stop being deported was taken to Stockholm and put on a plane there.

While Ms Ersson can be heard saying in the livestream her protest was perfectly legal and she hadn’t committed a crime, Swedish authorities have said she can face fines or 6 months in jail for disobeying a pilot while on board a plane.

Earlier this month another Afghan deportee was released from a flight after he protested loudly on board.