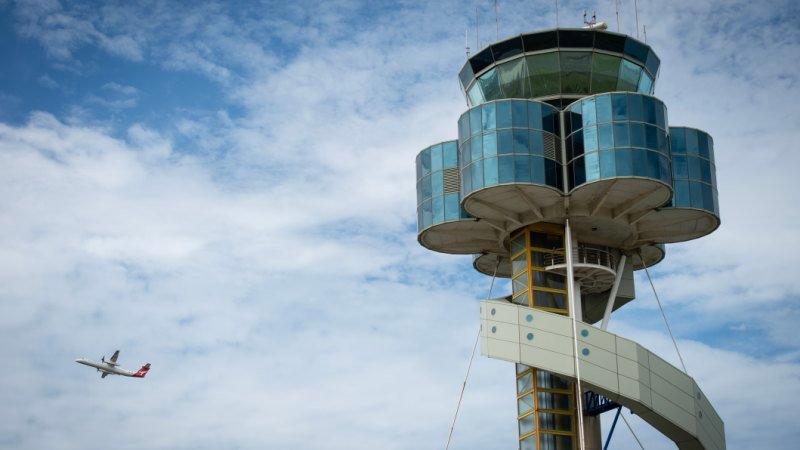 A complete ground stop was put in place at Sydney airport today after the control tower was evacuated.

The Sydney Air Traffic Control Tower has been evacuated after smoke was detected. There is a full ground stop in place with no aircraft departing or arriving at this time @SydneyAirport. We will update you as soon as we know more. pic.twitter.com/Riw1l59tDP

The tower was evacuated at approxomately 11:40am Australian Eastern Daylight Saving Time (AEDT) after smoke was detected on the ground floor of the tower. Some flights were diverted to Canberra or Melbourne while others returned to their point of origin.

Due to the Sydney Air Traffic Control tower being evacuated, there are currently no aircraft flying in and out of Sydney Airport. We will continue to provide updates as more information becomes available. To check your flight status, click here: https://t.co/m479B0nZMc

Firefighters discovered the cause of the smoke was a malfunctioning battery pack in a computer back-up system. “Firefighters used carbon dioxide extinguishers on the battery system to cool it down,” Inspector Bryce Jonas from Fire and Rescue NSW told the Sydney Morning Herald. Inspector Jonas told News Ltd, “regardless of how important their job is of running the airport, human lives are much more important. They did the right thing.”

Flights to and from Sydney Airport are currently delayed due to an evacuation in the Air Traffic Control tower. We’ll continue to share updates. Please check your flight’s status: https://t.co/MmwZCYBxtU

Approximately 20 employees were given the all clear to return to the tower at approximately 12:30pm AEDT with arrivals being allowed to land at a slower rate with the assistance of air traffic controllers from the neighbouring state of Victoria. Departures began leaving at 1.20pm AEDT. The evacuation resulted in delays of up to 60 mins for domestic flights and up to 80 minutes for International flights.

The Sydney – Melbourne route is the 2nd busiest domestic route in the world.

In response to an evolving incident at Sydney Airport, Newcastle Airport has received requests to take diverted aircraft. We are working with Sydney Airport and Williamtown RAAF to assist where we can. “Sydney Airport”

just chilling in a plane on the tarmac at sydney airport until air traffic control tower gets un-evacuated. @virginaustralia which cupboard is the wine in https://t.co/8vVscakTlw

First my flight gets cancelled, gets rescheduled to 3 hours later, then gets delayed and now @SydneyAirport air control tower is on fire?

Friday what did I do to you?#badfridayfeelings

Flights to and from #sydneyairport have resumed. Some our flights may be delayed while all airlines work to get flights back on track. Check your flight status here: https://t.co/Z2kL1oOc1s

UPDATE 1:19pm – We are fully back to operations at Sydney Tower. Departures are running smoothly. All restrictions lifted. @SydneyAirport