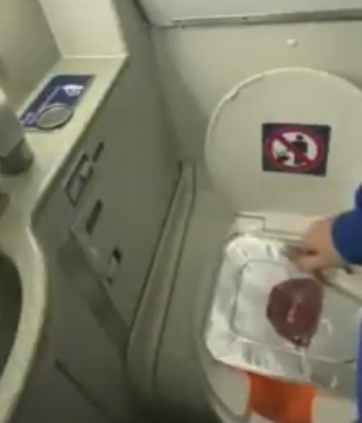 A TikTok user posted a video to TikTok, where he cooks a steak in a Delta plane lavatory.

In the video, Marcus Munroe, a New York prankster, was seen putting a can in the toilet. Then he lights it and places an aluminum grilling sheet over the seat, puts the raw steak on the sheet before pouring white wine over it to marinate.

He then returns to his seat. The now-deleted video kicks off stating “they don’t have hot meals anymore on airplanes, so I came up with a solution.”

However, Munroe later confirmed that the video was an illusion. He tweeted saying:

“I sincerely regret the confusion and difficulty caused by the original bathroom video, which I’ve removed. As a comedian, I intended only to make people laugh, but I recognize that I went about it the wrong way. As this video shows, the illusion was created by a lighting effect.”