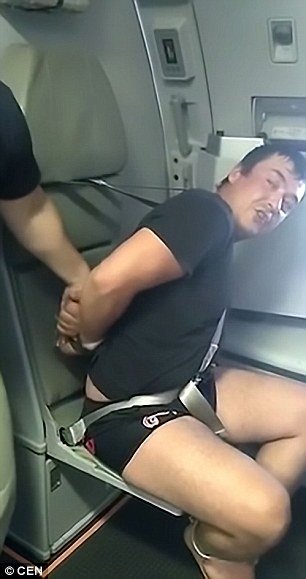 Passengers and cabin crew were forced to restrain a fellow traveller who allegedly punched a flight attendant during a drunken rampage on board a plane.

The dramatic scene unfolded on an Aeroflot flight in Russia, and the aftermath was captured on camera once the man was restrained.

Footage and photos show the passenger – wearing a T-shirt and pants – strapped into a flight attendant’s seat with his hands tied behind his back.

Russian media said the man punched a flight attendant in the face on a domestic flight from the city of Yuzhno-Sakhalinsk, on an island just north of Japan, to Moscow.

Other crew members and passengers rushed in to help, and they managed to overpower the man and tie his hands behind his back with duct tape from the galley. They strapped him into a flight attendant’s seat, near an exit, to keep him away from other travellers.