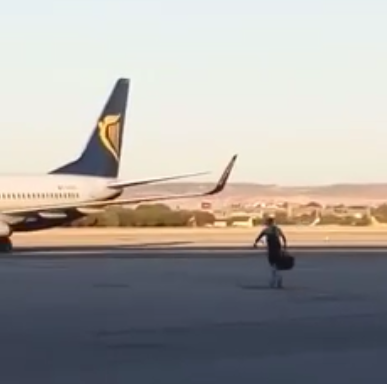 A video, shot by airport workers and posted on Facebook, shows the unidentified man clutching his bags and jumping off an air bridge – the extendable corridor that connects airport departure gates with plane doors – and on to the asphalt of Barajas airport in the hope of reaching his plane in time.

A spokesmanconfirmed the incident had taken place at about 9pm on 5 August.

“The passenger had reached the gate with his boarding pass after clearing security,” he said. “He broke through a fire escape, the doors opened and he got out that way.”

Although the alarm was sounded and the Guardia Civil were called, he added, the man still managed to board his flight and get to Gran Canaria, where he was arrested by police.

The Guardia Civil said that while the man had been stopped by airport workers and told to wait for the police, he had not done so. “It seems that he got on to the tarmac because he’d missed his flight but the plane he was trying to get on wasn’t his,” said a spokeswoman. “When he realised that, he got on the flight to Gran Canaria.”