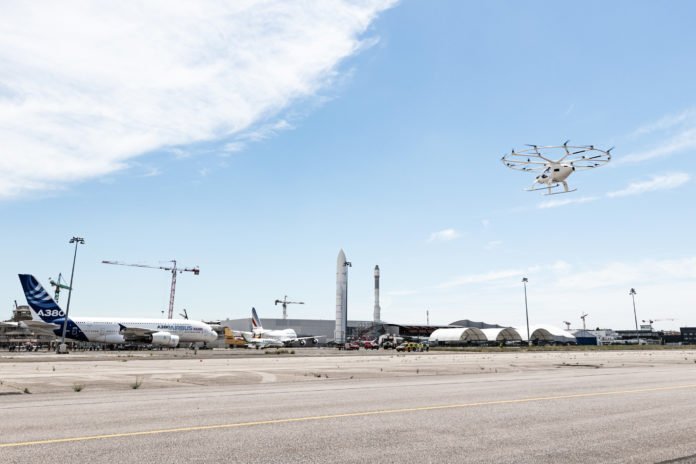 Volocopter 2X electric vertical performed its first flight at Le Bourget Airfield during the Paris Air Forum on June 21, as announced by the company in a press release.

The electric vertical takeoff and landing (eVTOL) aircraft manufacturer Volocopter demonstrated the progress they are making to bring electric air taxis in the Paris region safely.

The first flight lasted for three minutes, and the electric air taxi flew in a 500 m route at speeds up to 30 km/h and 30m high. In a press release, Volocopter Chief executive Florian Reuter said:

“The first flight, today in Paris, highlights Volocopter’s commitment to bring air taxi services to this region in time for the 2024 Olympic Games.”

Volocopter was chosen as the first vehicle and operations partner to launch the urban air mobility industrial branch in Paris and is currently working with the French Civil Aviation Authority to bring air taxis to the Île-de-France region by 2024.

“The alliance of the Paris region, Groupe ADP, and RATP Groupe and their intent to bring electric air taxis to France is a stellar example of the collaborative approach we see to be the most successful for adding this exciting category of mobility to cities globally,” said Reuter.