“We were standing in the rebooking queue for more than 7 hours!”: Thousands of passengers stranded after Frankfurt Airport security breakdown 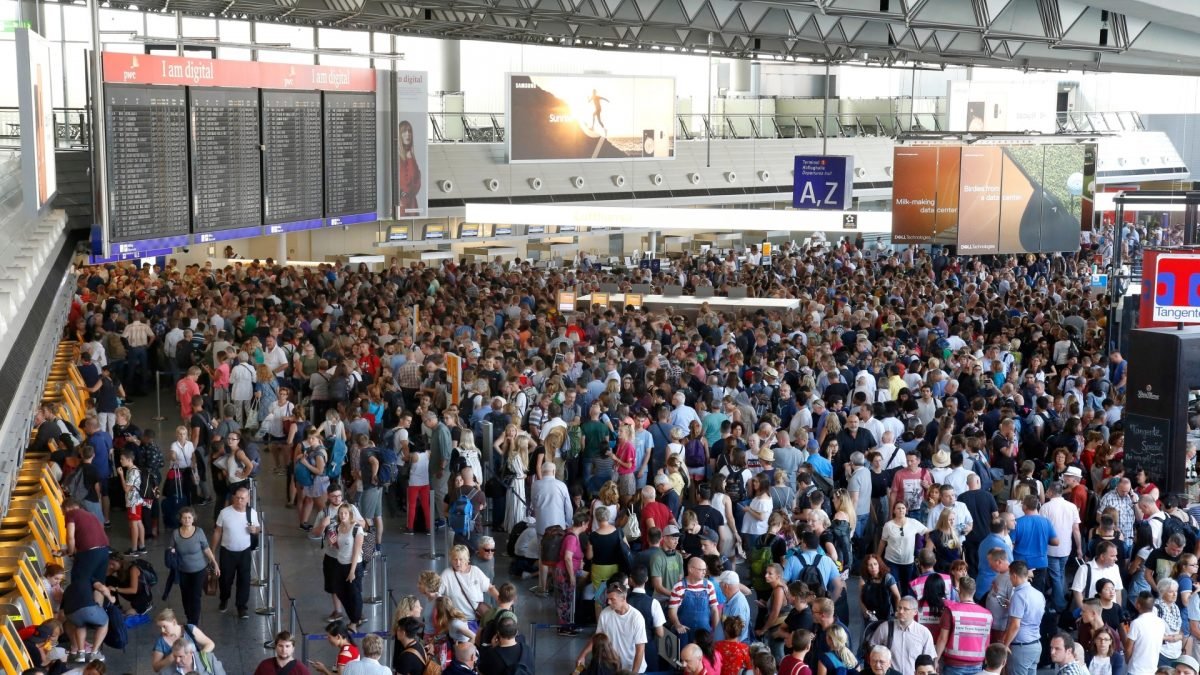 Frankfurt Airport Terminal 1 was evacuated due to a security mistake on Tuesday, which left thousands of passengers stranded.

Reason for the evacuation of area A and Z in Terminal 1 was the mistake by a single airport security worker. A passenger’s bag had a positive explosives test, but instead of carefully checking the potential threat and questioning the traveller, the security worker let the passenger pass into the secure departure area of Germany’s largest airport at 11:55am local time.

More than one and a half hours passed before German Federal Police was informed about the incident and decided to evacuate the Terminal’s security areas, including the aircraft that were already boarded and ready to leave, at around 12:40 local time. It took another two hours before the zones were cleared and passengers were allowed to go through security checks again.

It turned out that the suspected passengers were a French family of four, who didn’t even know they were a ‘threat’, until airport police found them.

Thousands of passengers ended up being stranded in the Terminal. Almost all flights from the area are Lufthansa flights. The airline said more than 7,000 passengers were affected by flight cancellations.

We talked to several stranded passengers. One of them was due to fly from Frankfurt to Portugal but ended up in long service lines and finally in an airport hotel. “We were first standing in the Lufthansa rebooking queue in area A, where we were scheduled to fly from. After a more than one hour long wait, we were told to go to area B, where we waited for another 6 hours before we finally got a hotel room. […] We still don’t have a new flight, after the one we were booked on departed without passengers.”

The German flag carrier confirmed that several flights departed empty, to minimize the effect on the flight schedule.

“...Some flights had to leave Frankfurt without transporting passengers in order to reposition aircraft and crews at departure airports outside of Frankfurt as quickly as possible to stabilize the flight schedule.“

“Lufthansa only had 14 rebooking counters open in the entire Terminal 1 – For thousands of passengers!”

Another passenger tells us about a complete lack of communication “The speakers were way too quiet, you could barely hear any information. Constantly random loud alarm sounds from obviously incompetent and untrained employees who just caused more panicking among the passengers.”

Everyone we have talked to complained about a lack of coordination from both Frankfurt Airport and Lufthansa. Passengers also noted that the airline’s phone support was unable to help, other support channels, such as social media or email, were unavailable as well, leaving passengers with only one option: waiting in a queue for seven hours.

The airline first only referred to its press release:

“Lufthansa is doing everything to minimize the unavoidable impact of the police measures on its passengers. Nevertheless, delays and individual cancellations may occur as a result of the operation and the affects will continue into the evening hours.“

Lufthansa says it booked 2,000 hotel rooms for affected travellers, or – in the words of all evacuated passengers: not enough. The German carrier later updated the number of rooms booked to 4,000. It also states that it set up camp beds in the airport terminal, just in case passengers are tired or unable to get a hotel room. Only 100 people used these beds according to the statement.

A spokesperson for the airline later confirmed the efforts made by it’s employees at Frankfurt Airport in a phone call with AIRLIVE.net: “I don’t think our organisation failed. We were confronted with an unforeseeable incident, which was the fault of airport security and our employees did everything they could to help out passengers. Many of our staff worked overtime.“