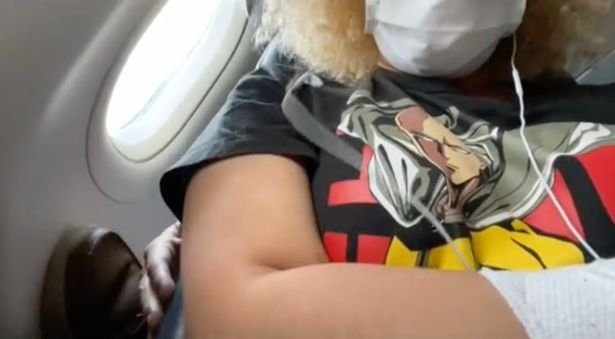 The woman was left feeling “uncomfortable” and “confused” when she felt a strange touch to the side of her breast.

A woman has caught a fellow plane passenger allegedly groping her from behind shortly after boarding.

The female passenger was travelling to California with her family on Spirit Airlines on Thursday (June 17) when the incident happened.

In a series of videos, she explained that they were split into different rows and she ended up swapping the aisle seat with a woman and got to sit by the window.

While waiting for the plane to take off, the 18-year-old said she felt someone touching her from the side and so started filming to catch it on video.

The first clip she posted showed the alleged incident occurring. “On my flight to California, the man behind kept touching my arms and boob,” she said in the video.

She leaned on the arm rest and through the gap between the window and the chair, a hand was seen slowly moving towards her arm.

When she moved her right arm, the man appeared to retract his hand and places it on the side of her chair instead.

In another clip, she explained that she was leaning on the window side and reading a book before takeoff.

“I feel like there’s a slight touch, like caressing me right here at the side of my breast and I was very confused,” she said.

The woman added: “And when I confronted him and showed the videos to everyone around me and the flight attendants, I was told to sit down and stay quiet.”